Norcada and one of its researchers Hooman Hosseinkhannazer have been featured in a success story by Alberta Innovates Technology Future (AITF) for the company’s success in developing and commercializing thin film MEMS devices for electron and X-ray microscopy research applications.

The story outlined the market opportunity identified by the company in 2005 and its subsequent pursuit of the appropriate technology to address the market needs.  The story also highlighted the impact the AITF’s Industry r&D Associates program can have for small tech companies.

Norcada specializes in the development and manufacturing of MEMS devices (www.norcada.com) and semiconductor DFB lasers (www.norcada-lasers.com) for a wide range of industrial and scientific applications.

Founded in 2002, Norcada has a state-of-the-art MEMS and photonics fabrication facility in Edmonton, Alberta, home to a major nanotechnology cluster in Canada.

A PDF version of the story can be downloaded below: 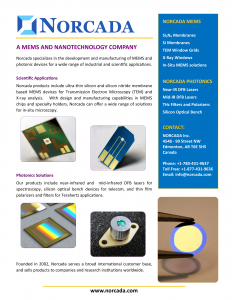